What’s it Like Traveling to Alaska in the Winter?

by admin
in Uncategorized
0


Is traveling in Alaska during the winter an insane thing to do?

This is a perfectly reasonable question, and I’m glad you asked, because I had the same question before heading to Alaska this past February.

I was prepared for this to be a tough trip. I worried about the roads and extreme cold, but I’m happy to report that my fears were assuaged almost immediately. Alaska was emptier, beautiful in a different way, and the dry cold in the interior made for pretty easy traveling despite the snow. Thinking of going in the winter as well? Whether it’s Aurora you’re chasing or an empty Denali National Park, this is what you need to know about traveling to Alaska in the winter:

The Best Time for Aurora is Near the Spring Equinox

I’m guessing that your biggest reason for choosing Alaska in the winter is to see the northern lights, or the aurora borealis.

I’ve been fortunate to see the Aurora four times, in four different places around the world including Iceland, Canada, Finland, and most recently, in Alaska.

I’ve seen them all at different times of the year, but in Alaska in particular offers clearer skies in March, plus the spring equinox tends to have the period with the most viewing probability.

Alaska is also the cheapest place I have ever gone to see the Aurora. The Nordic countries can be quite expensive, as can getting to the Arctic in Canada. But with Alaska airlines, living on the West Coast means we have a pretty easy way to get up there via Seattle.

For my Alaskan winter experience I chose Fairbanks, which is in the interior of Alaska, highly accessible, and a great jumping off point for Aurora adventures.

That brings me to the point I need to make about viewing Aurora. If that’s the only reason you have for going somewhere, you might be disappointed if you don’t see them, which is a real possibility. So pick a place that has activities you want to do as well!

In Fairbanks you can also travel to the North Pole to see Santa, visit the Chena hot springs, go dog sledding, and in late February, can access Denali National Park up to mile 12.5 and see the World Ice Art Championships.

So let’s get one very obvious thing out of the way; Alaska is huge and you’re going to have to narrow it down when it comes to your winter travels there.

You could fly into any one of Alaska’s major cities, but Fairbanks is well-situated for the Northern Lights – much moreso than Anchorage or Juneau are.

We based ourselves more or less out of Fairbanks, and this is what we saw:

Though I’m sure any part of Alaska would have its own special beauty, we liked Fairbanks for its easy access and location in the Aurora oval. It’s the largest city in Alaska’s interior, and is easy to fly into and well-connected.

Some Parts of Alaska Will be Inaccessible in the Winter

This brings me to my next point. There are some gravel roads and parts of Alaska that are not drivable in the winter. If you were hoping to

If you were hoping To drive the Dalton Highway, Denali Highway, McCarthy highway, and more gravel roads, those are generally not accessible during the winter months. Many of the hikes and mountain routes that are beautiful in the summer will also not be nearly as accessible, or wise to attempt, in the winter months.

We went in the winter time knowing that this was true.

The Roads + Renting the Right Vehicle

My biggest concern was how driving would be in Alaska in the winter. Are the roads icy, and how well-maintained are they? I can only speak from my own experience, but there had been plenty of snow right before my trip and a bit during, and for the most part, the roads were very well plowed and were often down to tar.

As a child of Southern California, I avoid driving in any kind of inclement weather, but my boyfriend who has experience driving in Massachusetts and Vermont found the driving around Fairbanks to be much easier. Since it is a dry cold and it stays pretty well below freezing all throughout winter, you don’t get as much of the melting and refreezing that causes ice on the roads.

That said, we still rented a vehicle that had four-wheel-drive AND snow tires. Since we did drive some mountain roads, including into Denali National Park and to a beautiful mountain yurt in Fairbanks’ ski area, we were very glad to have it.

That said, Most major car rental companies do not put winter tires on their cars. I only found one, through Alaska Auto Rental, that offered both four-wheel-drive and snow tires. Snow tires are important, because even with four-wheel-drive, if you don’t have traction you can slip and slide. Renting from this company was a bit annoying and more expensive, particularly because they don’t have a location at the airport and you have to Uber or taxi to their office, but I would still rent from them again to have the snow tires.

If you’re visiting some of the coastal areas during the Alaskan winter, get prepared for some serious cold. I looked at the weather for the most northern city, Utqiagvik, and saw that they had a much higher humidity percentage and frequent wind. So although the temperature was -8 F°, it ‘felt like’ -33° according to my weather app. Yikes!

But in Denali and Fairbanks, even -11° didn’t feel that terrible since it was a dry cold. Don’t get me wrong, I still needed snow pants, a heavy jacket, merino wool layers, and boots that are suited to those temperatures, but with the right gear we were out for hours at night chasing aurora without feeling uncomfortable.

Read more about the gear I recommend for extreme cold here.

So overall I’m pleased to say that I was more impressed with Alaska in the winter than I thought I would be. I worried about road conditions, worried that we would have to be completely self-reliant, and that hardly anything would be available or open. And while many things around Denali National Park were closed, we still had an amazing time there, seeing only a handful of other people all day.

I doubt anyone in the summertime there can say that!

So if you are hoping to see the northern lights, want to experience Alaska without the crowds, are looking for the peace and quiet that only the dead of winter can provide, and want a true arctic experience without leaving the US, Alaska in the winter is awesome, and I have a feeling I will be back! 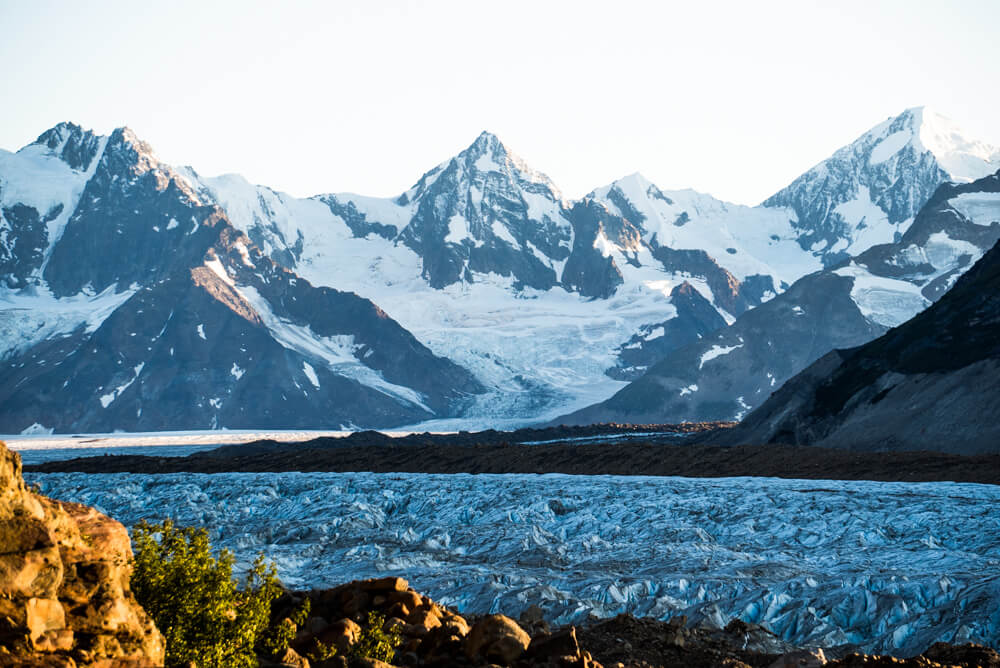